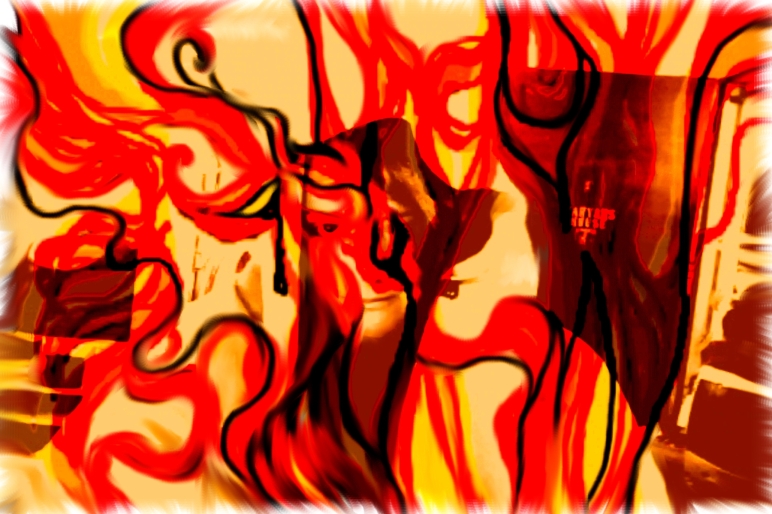 Fantasy
Sexual odes to Love,
Iridescent bubbles,
Slow dancing with angels,
Infatuated euphoria,
Transforming,
Music that makes me smile,
Writing love songs to my beloved
Sprung full grown from my brain
After giving me a headache

Dark eyes filled with stars,
Leather and sheesha,
Galloping across the plains,
Mountains in the distance,
Hawks on our wrists,
Flung skywards
Full of prayers

Deep blue evening,
Round pebbles making water speak,
Hung around your neck
Wear me,
And I will wear you,
Leaning on the tree to big to move,
Breathing in you
Breathing out you
In and out moving
Into darkening
Cool

The room The screen The words The end.

It is weird being away from you because I am away from Facebook.

When I was a kid I read the science fiction stories about people who fell in love and never met. People had friends and relationships and never left their homes. I am so old now I have forgotten the names and authors of the thousands of books I read but more than one author saw a future when humanity had no need for actual contact to make CONTACT.

I never thought I would live to see the day…

…I have lived to see the day and not only that day but days of robotics and cameras on the roads out of the city. I never thought I would be the old person who was telling the young about how times were when I was young and now the last people left on earth, who know what it means to live the way I was raised live on the opposite side of the world but even they do not completely understand because they have cell phones.

You can have kids now without actually birthing them. You can buy a hover-board if you have enough money. Google glasses anyone? Google watch?

There were days when the green and red landscape rolled on forever before it came rolled up as turf on the back of a flat bed and rolled out for an instant lawn over what was once prairie land. Urban sprawl ate the farmlands up and the edges of town met the edges of other towns outside of places like ‘Dallas’ until they became one huge mega-city that teemed with so many cars a commute took two or three hours of your day, along with the eight to ten hours a day you might work on a job and that left, and still leaves now, only time for sleeping.

There were days when we picked up the sticks that fell off the trees and imagined they were guns and made the rapid-fire ‘ah-ah-ah-ah-ah-ah-ah’ sounds with our throats to simulate the sound of machine guns. We made our dolls come to life from the plastic they sprang from and we made bushes and trees into ‘houses.’ Our minds, alone, were the source of the entertainment we had and we invented what we believed in.

How many now understand what it means to suspend belief to the point where a stick becomes a gun?

We have X-box now. No need for detailed imagination and yet it still springs forth from the human mind no matter how much the masses are made quiet from the ease of life…Here and there an amazing mind still spews fantasy like a human volcano. These people are ‘harvested’ to help create the mind-numbing things the masses crave.

TV was once said to be evil. You could watch evil and not participate. We are on the verge of a world where you can rape a holograph in a 3-D universe and it doesn’t matter because it isn’t real.

No I am not talking about the new ‘helmet games’ of the very wealthy but the games we stand on the edge of as I type these words. The games I read about once where, through various devices, you can literally LIVE a different life besides your own. You don’t have to have acne or be fat. You don’t need braces or a nose job you just need a human mind.